Like many designer breeds, the Teacup Yorkie Poo is quite a young hybrid — he’s been popular for about a decade. He was originally developed to create a toy-sized dog with a hypoallergenic coat and was free of the genetic disorders that affected the parent breeds, the Yorkshire Terrier and the Toy or Miniature Poodle.

A fun-loving “designer dog” — and therefore a mixed dog breed — a Teacup Yorkie Poo is a cross between the Yorkshire Terrier and a Toy or Miniature Poodle. Intelligent, affectionate, and gentle, he makes a delightful companion and is perfectly suited to apartment life, especially if you don’t mind the barking. He has plenty of energy to be burned off, and he loves to play when he’s not parked on your lap watching the world go by. His ability to run fast and jump high can be surprising to those who aren’t expecting a canine Superman in miniature.

This cute little designer pooch crosses a Toy Poodle and a Yorkshire Terrier. With heaps of personality, the Teacup Yorkie Poo thrives on human interaction. The perfect little companion for small families and apartment dwellers, these toy-sized dogs are loving, active, and fiercely loyal to their owners.

Is the teacup Yorkie Poo Smart?

The Teacup Yorkie Poo is a smart, friendly little dog who loves to learn, which makes him very easy to train. Like most dogs, they love to please, and they’ll quickly become a treasured member of your family. And they’re great with kids! Described as a ‘designer pooch with great qualities’, the Teacup Yorkie Poo is quite a new breed. They’ve only been around for the past ten years, so they’re still a novelty for many people.

The Teacup Yorkie Poo loves people and fun, not necessarily in that order. He will delight his family and is always willing to perform tricks or show off for any visitor. His confidence keeps him from being overly snappy or aggressive; he’s happy in his own skin. The Teacup Yorkie Poo can be an excellent companion to anyone looking for a small, confident dog with ample energy and even greater love.

Like most Poodle hybrids, the Teacup Yorkie Poo was originally designed to be a companion dog who could reside with allergy sufferers. The goal was a small dog who didn’t have the diseases of the Yorkshire Terrier or Poodle, both of whom have suffered from health problems related to poor breeding or over-breeding. 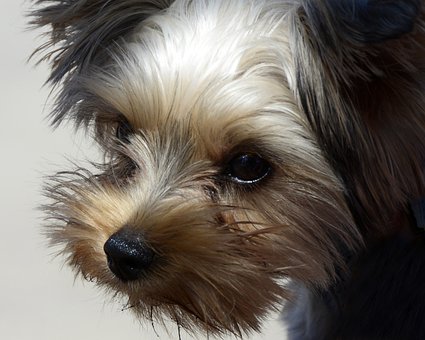 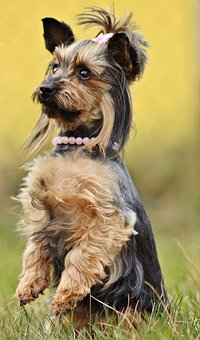 The Teacup Yorkie Poo is an active, affectionate, fun-loving dog who relishes the company of people. He is a loving and loyal companion dog who enjoys participating in family activities. He’s confident, thanks to his terrier heritage, but usually, he’s also easygoing and less demanding than many other small breeds.

He’s intelligent enough that he can be a perfect companion given consistent and positive training. He tends to be watchful and is happy looking at the world from the warmth of his owner’s lap, but he also enjoys exploring new things on his own.

Temperament is affected by several factors, including heredity, training, and socialization. Puppies with nice temperaments are curious and playful, willing to approach people and be held by them. Choose the middle-of-the-road puppy, not the one who’s beating up his littermates or the one who’s hiding in the corner.

Always meet at least one of the parents — usually, the mother is the one who’s available — to ensure that they have nice temperaments that you’re comfortable with. Meeting siblings or other relatives of the parents is also helpful for evaluating what a puppy will be like when he grows up.

Enrolling him in a puppy kindergarten class is a great start. Inviting visitors over regularly and taking him to busy parks, stores that allow dogs, and on leisurely strolls to meet neighbors will also help him polish his social skills. 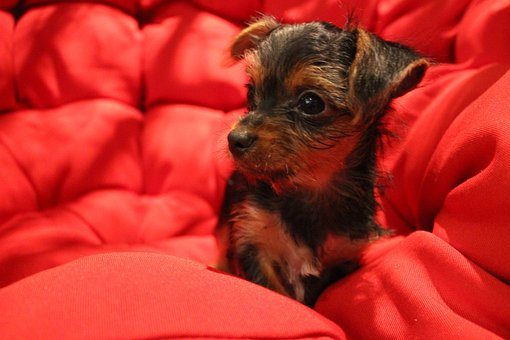 The Teacup Yorkie Poo is equally at home in a house or an apartment. He’s far too small to live outside; he must live indoors for his physical and emotional well-being. He requires daily exercise since he has a surprising amount of energy (read between those lines). A daily walk or romp in the yard will provide enough exercise to keep him healthy and happy. The Teacup Yorkie Poo can also burn off steam by playing a game of fetch down a hallway.

However, never stick your Teacup Yorkie Poo in a crate all day long. It’s not a jail, and he shouldn’t spend more than a few hours at a time in it except when he’s sleeping at night. Teacup Yorkie Poos are people dogs and aren’t meant to spend their lives locked up in a crate or kennel.

Teacup Yorkie Poos require a monthly bath and conditioning to maintain healthy skin and a beautiful coat, and even though they’re low shedders, they require daily brushing to prevent matting and tangling. In addition, their ears should be checked for moisture retention every week.

Their fine silky hair will need to be trimmed, including hair on the face and ears, at least once a month. Ears should be checked and cleaned for wax and dirt, and hair around the eyes should be kept short. 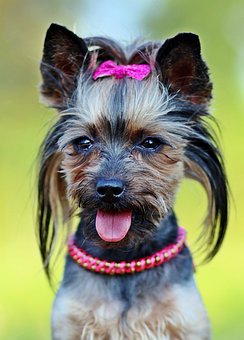 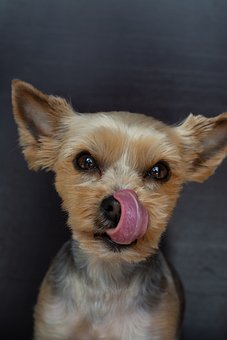 NOTE: How much your adult dog eats depends on size, age, build, metabolism, and activity level. Dogs are individuals, just like people, and they don’t all need the same amount of food. A highly active dog will need more than a couch potato dog. The quality of dog food you buy also makes a difference — the better the dog food, the further it will go toward nourishing your dog, and the less of it you’ll need to shake into your dog’s bowl.

Keep your Teacup Yorkie Poo in good shape by measuring his food and feeding him twice a day rather than always leaving food out. If you’re unsure whether he’s overweight, give him the eye and hands-on tests. First, look down at him. You should be able to see a waist. Then place your hands on his back, thumbs along the spine, with the fingers spread downward. You should be able to feel but not see his ribs without having to press hard. If you can’t, he needs less food and more exercise. 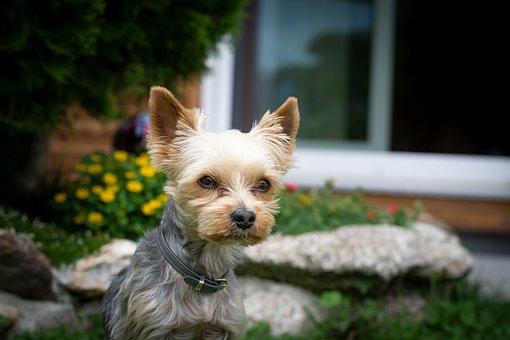 The Teacup Yorkie Poo is seen in various colors, including cream, black, white, red, sable, apricot, tan, chocolate, gray, and silver. This versatile boy can sport multiple colors and markings, including black with tan points. Although he’s considered a non- to low-shedder, the Teacup Yorkie Poo requires care in keeping that fine coat silky and healthy. Brushing him daily wards off tangles. Brush the hair away from the eyes to prevent it from becoming irritating, which it will certainly be if this task is neglected. You can also protect his eyes by trimming the hair with a pair of scissors.

His coat should be trimmed regularly to whatever length you prefer; that’s the beauty of a designer breed. No one will say you’ve clipped him incorrectly because there is no “correct” cut. Bathing keeps his coat silky to the touch, but he only needs to be bathed when necessary, not on a schedule.

Brush your Teacup Yorkie Poo’s teeth at least twice a week to remove tartar buildup and the bacteria that lurk inside it. Toy breeds are notorious for dental problems, as getting all those teeth into such a tiny mouth is tough. Daily brushing is even better for preventing gum disease and bad breath. 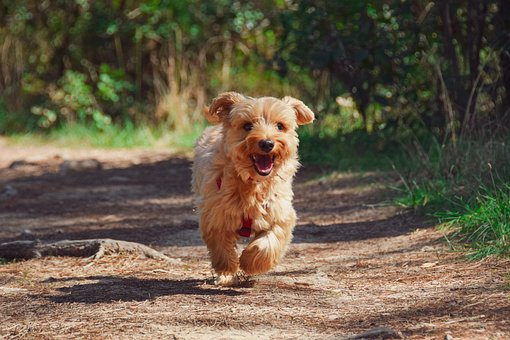 Trim nails once or twice a month if your dog doesn’t wear them down naturally to prevent painful tears and other problems. They’re too long if you hear them clicking on the floor. Dog toenails have blood vessels in them, and if you cut too far, you can cause bleeding — and your dog may not cooperate the next time he sees the nail clippers come out. So, if you’re not experienced trimming dog nails, ask a vet or groomer for pointers.

His ears should be checked weekly for redness or a bad odor, which can indicate an infection. When you check your dog’s ears, wipe them out with a cotton ball dampened with gentle, pH-balanced ear cleaner to help prevent infections. Don’t insert anything into the ear canal; clean the outer ear.

Begin accustoming your Teacup Yorkie Poo to being brushed and examined when he’s a puppy. Handle his paws frequently — dogs are touchy about their feet — and look inside his mouth. Make grooming a positive experience filled with praise and rewards, and you’ll lay the groundwork for easy veterinary exams and another handling when he’s an adult.

As you groom, check for sores, rashes, or signs of infection such as redness, tenderness, or inflammation on the skin, nose, mouth, eyes, and feet. Eyes should be clear, with no redness or discharge. Your careful weekly exam will help you spot potential health problems early. 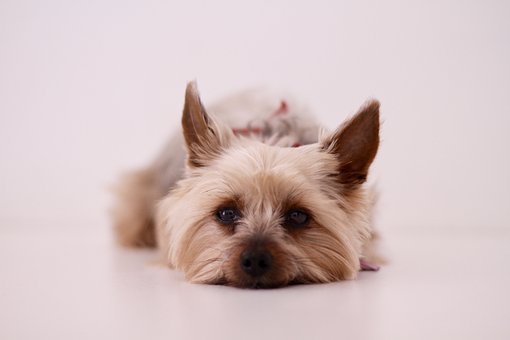 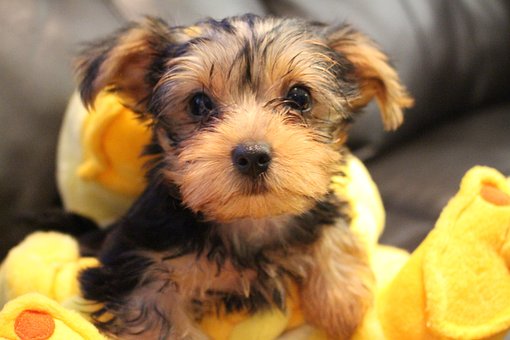